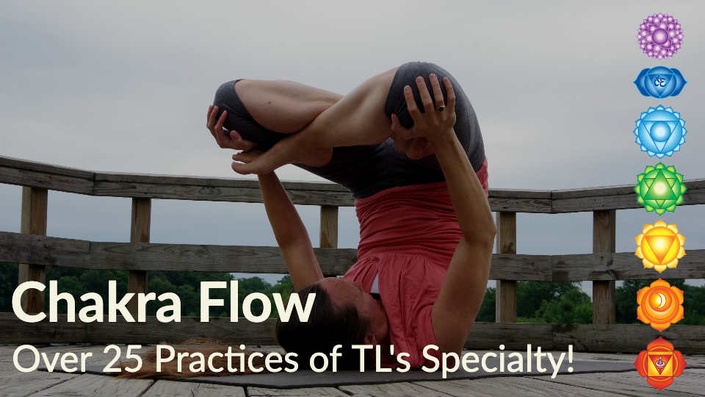 TeriLeigh discovered she had the unique ability to see and read auras and chakras when she was just 10 years old. When she attended her first yoga class (with mirrors) she discovered that the auras and chakras change dramatically during yoga practice. She became a yoga teacher so that she could study and analyze what the specific poses did to the chakras and auras of individuals. For almost two decades TeriLeigh has been teaching a CHAKRA FLOW. This series includes a collection of Chakra Flow practices taught at yoga studios nationwide.

Since 2004, TeriLeigh has taught the chakras for yoga in over 200 studios and for dozens of yoga teacher trainings. She has certified over 100 instructors in yoga for the chakras. She rolls out of bed onto her yoga mat nearly every morning, and has been doing so since 1999. A master of the chakra system, she teaches a unique practice based on what she sees in the chakras and auras of her students.

With training, certification, and study with Baron Baptiste, Seane Corn, CorePower Yoga, Bikram Choudhury, and many more, she has developed a unique style of precise alignment linked with gentle poses.

When does the course start and finish?
The course starts now and never ends! It is a completely self-paced online course - you decide when you start and when you finish.
How long do I have access to the course?
If you pay the MONTHLY MEMBERSHIP rate, you get full access each month you pay. You can cancel at any time. Once you cancel, you will no longer have access. If you pay the ONE-TIME RATE, you have unlimited access to this course for as long as you like - across any and all devices you own.
What if I am unhappy with the course?
We would never want you to be unhappy! If you are unsatisfied with your purchase, contact us in the first 30 days and we will give you a full refund.